Portugal is home in many ways, and home is inextricably linked with food. One the dishes I regularly order when I’m back in Portugal is Carne de Porco à Alentejana. In my usual home in Singapore, this dish is never actually called ‘Carne de Porco à Alentejana’ — it goes by ‘Portugese pork and clams’, and is a favourite among my family and friends, and one of my go-to dinner party recipes. My guests, especially those unfamiliar with Portuguese food, often ask me about what’s in it and how it’s cooked, and here’s where I go into educator mode — I begin by explaining what’s familiar and accessible about the dish, in a way that they can relate to.

Talking about things which are unfamiliar to people is a big part of my life and my identity as a half-Portuguese and half-Irish person who was born in the West Midlands in the UK and moved to Singapore in my twenties. This is particularly important with two of my great passions, music and food — the latter almost being a requirement of life in Singapore. I often find myself explaining Singaporean food to my parents back in the UK, and have to start with familiar ideas before extending the description into something different. As an ethnomusicologist who studies what many would refer to as ‘world’ music, I do the same thing with music.

Explaining Portuguese pork and clams begins with the ingredients which most people understand — the meat, which is marinated in white wine or vinho verde for 24 hours, along with garlic, paprika, and bay leaf. Other ingredients add weight and depth to this dish, from the clams, to the carrots, olives, and parsley. There are many people, however, who will find some ingredients in this dish unfamiliar and inaccessible. Someone who’s never really used olives in cooking may not be familiar with the ingredient. Or perhaps someone’s more accustomed to English parsley instead of the flat-leafed parsley I use in this recipe. It could be a preference — someone just may not like onions or carrots, or perhaps they avoid pork or shellfish for religious, health, or other reasons. And yet, there is likely to be something in the dish that many people can relate to, whether it’s the meat, shellfish, vegetables, or seasoning. When we try new dishes or new cuisine, we often relate it to something we already know.

Cambodia is another one of my favourite countries to visit, and during each of my visits I have enjoyed the local cuisine enough to bring ingredients and a cookbook home. On a recent trip there, I watched an ensemble of musicians playing Khmer folk music and went through a very similar thought process. Many of the instruments in the ensemble would be unfamiliar to most people, but it was entirely possible to relate to them based on what we know, and what’s familiar to us. In this ensemble, there are a number of Khmer instruments similar to those from other musical cultures and traditions. Knowing  something of Chinese music, I identified something which looked similar to an erhu – this instrument is called a tro. There was also a khim, similar to a hammered dulcimer, or the Chinese yangqin. Perhaps the erhu and hammered dulcimer are less commonly known instruments, but there was also a flute-like instrument known as a khloy, and a drum called a skor daey. Flutes and drums are surely familiar to most people — an average music student may not understand it if I mentioned a bansuri or a dizi, but would be likely to understand it if I explained it is a type of flute. 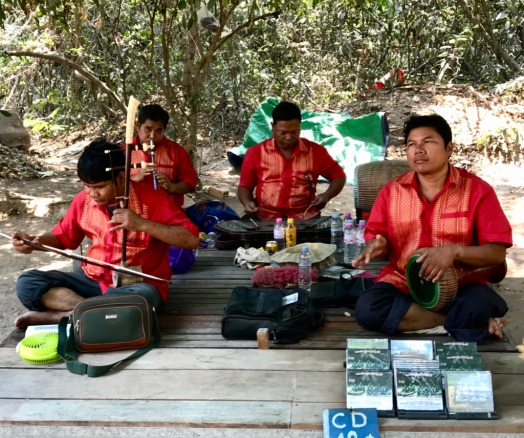 Musical instruments are interesting that way; there are equivalents across most musical traditions that could be familiar to someone from the outside, giving them at least one thing they can relate to. Stringed instruments, or cordophones, one of my specialist areas, exist in most if not all musical traditions. Something as simple as the ukulele, which can be bought as a toy for children, has equivalents of it all over the world. It’s an instrument generally associated with Hawaiian music, and for many people who grew up with ‘Western’ popular music, it evokes images of sandy beaches, leis, and luaus. But the Lusophone equivalent of the ukulele, the cavaquinho, is used in samba music in Brazil — which brings to mind a picture which is quite removed from the mellow connotations of what we usually understand to be Hawaiian music. Even less commonly known instruments such as the hammered dulcimer seem to have developed almost independently in musical cultures in England, Japan, Hungary, Korea, Romania, and the Americas. It is very likely that these parallels can give us entry points into musical traditions that are different to what we usually know.

As consumers or audiences of music, recognising these parallels gives us opportunities to experience new music meaningfully, and to become more adventurous in the types of music we listen to. Simply knowing that there is likely to be something familiar in a new musical form, and knowing that this entry point exists, is a useful way to approach new types of music especially if it seems intimidating or entirely foreign. Performers and creators of music have to understand this as well, and acknowledge that audiences are going to approach the music from their own entry points. The more diverse an audience, the more potential entry points you might find in any given performance, as each individual will approach your music from the lens of their own experiences and knowledge.

If a recipe in a Portuguese cookbook that’s older than me can find its way onto my dining table in Singapore, and introduce my friends and family to the culture and country that is a big part of who I am, surely it’s possible for music to bring new worlds and experiences to people. To begin this process, all we need to do is to acknowledge what may be inaccessible about the music, to identify the familiar aspects of it, and to use these entry points to help people to understand and eventually to appreciate what it means to a culture.

While this approach is an effective way to begin understanding unfamiliar music, let’s take it a step further by understanding the relationships within music.